Reminiscing Over Past Rugs

As Halloween approaches, I'm reminded of the fun I've had hooking many a Halloween rug.  Most of these were created in my early years of hooking.  I've been hooking about 10 1/2 years now.  Wow, time flies.  After hundreds of rugs, these still make me smile.  Happy Halloween to you!

Posted by The Grinning Sheep at 4:16 PM

Fun with Wool Booklets Back in Stock

I' ve restocked my Etsy shop with the Fun with Wool booklets.  Available at 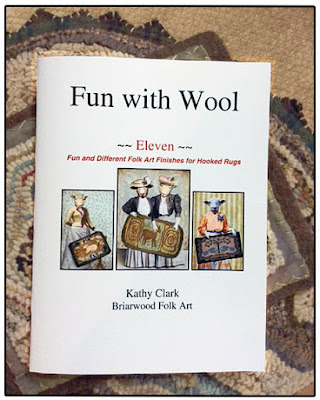 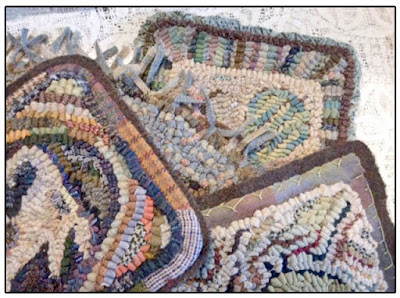 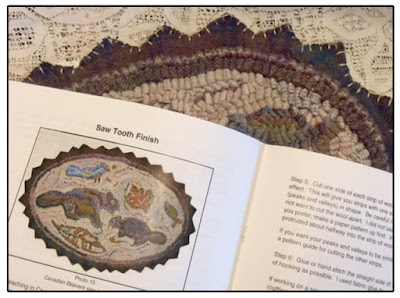 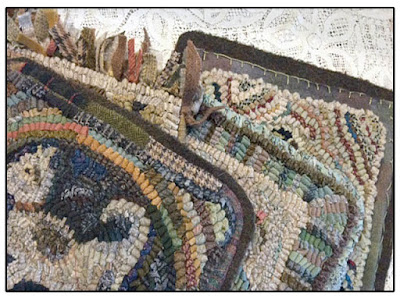 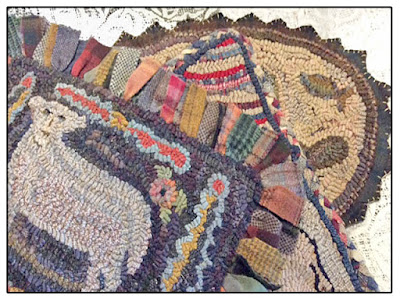 Posted by The Grinning Sheep at 5:13 PM

I finally have some of these fun critter dummy board kits listed in my Etsy shop.  They hook up fast as the hooked size is roughly 9" x 6" and instructions on how to mount the hooked piece onto the board is supplied in the kit.  All you need to add is wool of your choice (scraps work really well for these projects) and glue and black paint (optional). 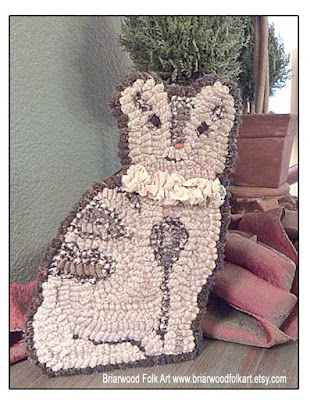 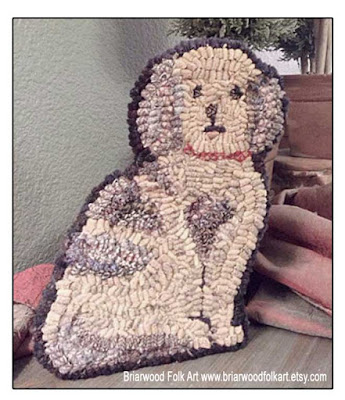 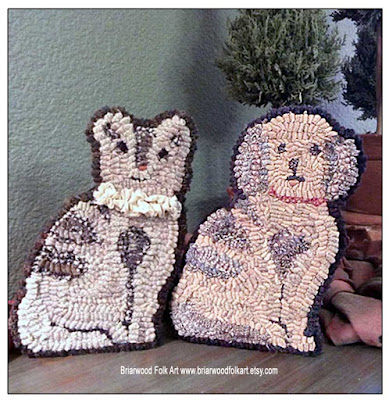 This is a fun hooking project and makes a great gift for cat and dog lovers.  They can be found at:
Briarwood Folk Art Etsy


Posted by The Grinning Sheep at 1:59 PM

I've been missing for many months....why?  Life was in the way.  You know how that happens, right?

Things such as a move to a new home last March, followed by house renovations, a month abroad in Europe last June, a lovely visit for two weeks with our granddaughter in July and other small matters made both blogging and hooking hard to do.

I actually did not hook for nine months because of so many projects and excursions.  Then, dear Margie from Dallas came to visit me in August to hook primitive style with me for a week and my appetite for hooking was reignited.

While Margie was here I hooked the Magdalena rug below as an example for show and tell for a one day class I gave on Magdalena's style of hooking at my local rug hooking guild. 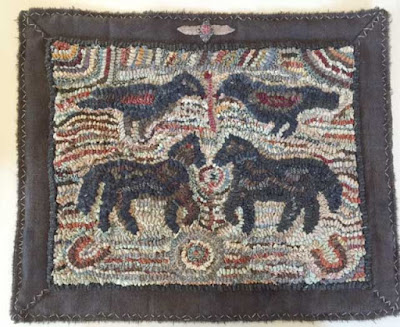 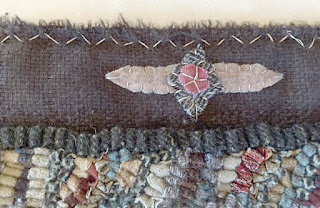 I used a Wool Mat Finish with Doo Dad Decoration to bind this rug; this finish is included in a booklet I self published last fall on rug finishing techniques.  The first edition of the booklet is nearly sold out and more are on order; I will update the blog to let you know as soon as I have more booklets available in my Etsy shop.  It will probably take about three weeks; I had no idea they would fly out of the shop as they have, but I do THANK YOU!!!
On top of being busy and not blogging, the bigger issue the past several months was that I got locked out of Blogger and could not get back in.  I hope, I think, I may have that issue under control now!  We shall see if this blog post gets published.  Here goes, I'm hitting the publish button now!

Posted by The Grinning Sheep at 11:18 AM

Oh, so sad, so very sad to report the reality that the Yellow Rose Rug Camp held in Belton TX appears to be a total goner. This is a real loss for a camp that was a great success from 2008 until this year.

The camp director has avoided communication with anyone trying to reach her.  Summers Mill retreat center reports it dropped the camp from its March dates due to non-payment of facility fees, overdue months ago.  The space has been re-booked for another venue.

Law enforcement resources verify the camp director is still alive (they did a welfare check); she's still going to work and receiving mail at her home.  Because the final date for camp has not yet come and gone, they cannot take action yet on behalf of campers' trying to recoup their funds.  If the camp director returns funds by March 15th, we all forget this ever happened.

Just two days ago I received an email from one of my students asking why she hadn't heard from me to discuss her project with camp only a few weeks away?  It's because I, along with no one else, have a contact list of campers to inform them of what is going on.  This was a complete shock to the student.  She is not in the mainstream hooking groups in TX that are "discussing" this issue.

Campers are wondering how to get their money back and this amounts to $690 for my husband.  His check was cashed in March 2014. This is not a pretty situation, but I'm especially relieved we didn't book airfare to TX for the March camp.  When non-communication from the camp director became an obvious issue, I held off on booking airfare.  To point out the seriousness of the airfare cost issue -- in past years some campers came from as far away as Nova Scotia;  I hope no one has incurred airfare costs on top of their camp fees.

On to a POSITIVE note from Texas:
Charlotte from TX sent me this picture of her completed "Puttin' on the Ritz" rug that she worked on in class in Fredericksburg TX last September.  She turned the pattern into a fun pillow.  Didn't she do a great job?!!! Knowing Charlotte has been a fun experience for me.  Good work Charlotte!  Many thanks for sending the picture of your completed rug too.

Best wishes to all!
Posted by The Grinning Sheep at 8:52 AM

Yes, I am a poor blogger and for a long time now I've been quiet.   I've had good reasons, if you read the post previous to this one.

I am trying to get back into the world of hooking and the most pressing matter is:

The status of Yellow Rose Rug Camp in Texas is a huge mystery right now.  I am supposed to be teaching at Yellow Rose but I've received no class roster and my efforts to text, email and telephone the camp director result in no response from her.

Students who signed up for my class are emailing me to ask me what is going on?  I wish I knew what is going on, but I have no more information than others seeking answers.

Contacts in Texas tell me no one is hearing back from the camp director .... no return communication to emails, text messages or phone calls.  It is very disheartening.  If you signed up to be in my class, please email me at briarwoodfolkart@surewest.net and we can do some advance planning, but honestly, contacts in Texas think the camp will likely not take place.

I hope for the best, but we are only 6 weeks out from camp and nothing is happening to confirm there will be a camp.  If you know anything more about this issue please email me.

Ending on a positive note, look at this cutie by Deb McCullough:  Labs in the Garden from a pattern and kit I put together for Deb.  Isn't it a happy rug?  I love it.  Good work Deb!!!

Posted by The Grinning Sheep at 9:54 AM

This fun picture of Daisy on a rug in progress was sent to me by Lori in New York.  It pretty much sums up my relationship with hooking lately:  it's still close to my heart but I haven't felt motivated to be creative and I'd rather just lie around. 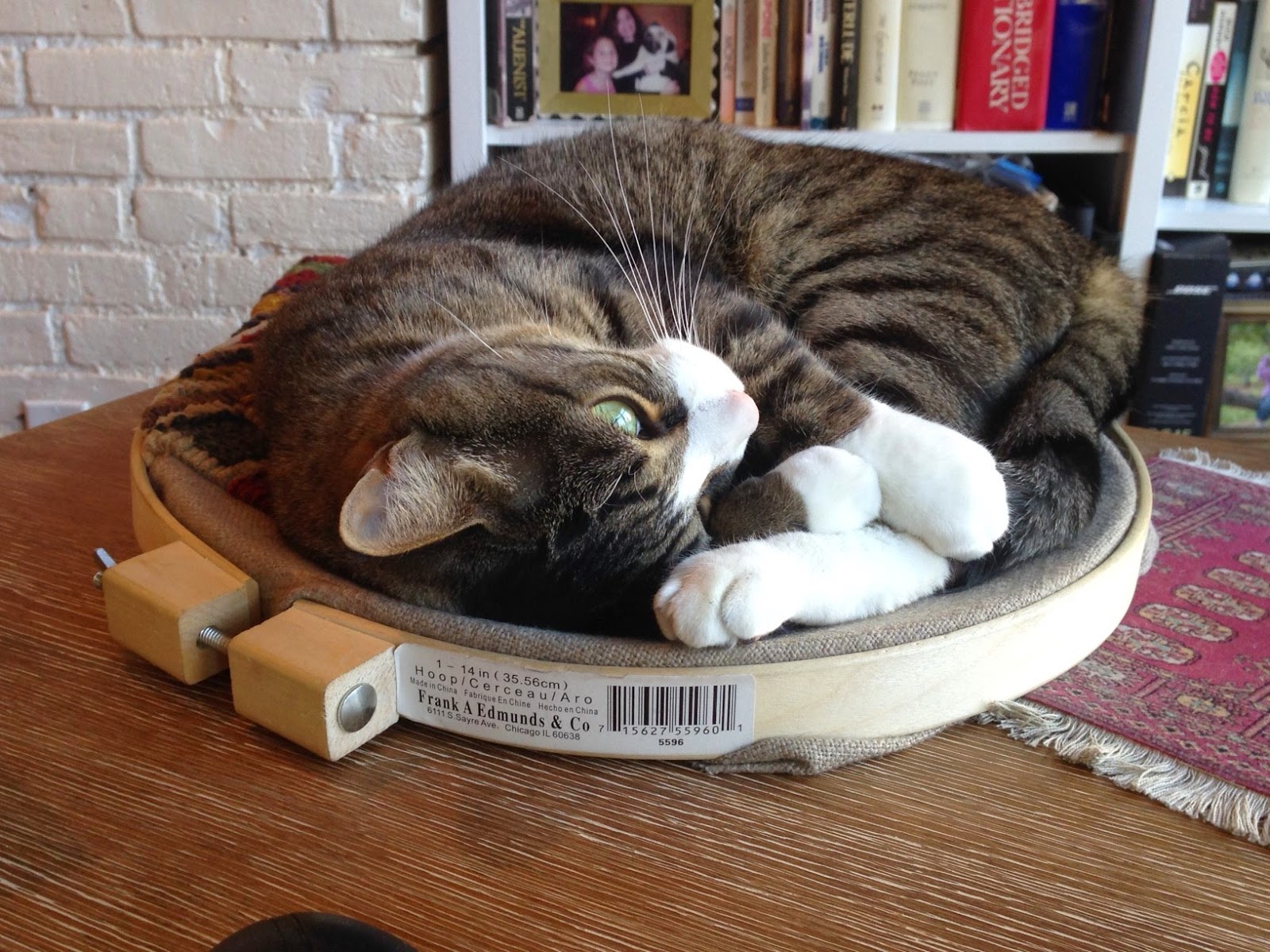 On November 1st my dear, sweet Mother passed away.  Before she died we faced many weeks of complicated health challenges.  Closing in on age 94, my Mother had a good run.  She was a trooper.  She never complained as her little body slowly gave out and macular degeneration darkened her world over the last 10 years.

I miss her terribly and I am trying to find my spirit again.  She was a best friend and a huge light in my life.  I treasure the fact I had a mother who was kind, loving, adoring and giving.  How lucky can you get?  What a gift I had all these years and will continue to have in my memories of her.

I know my spirit will return and time is a healing factor, but right now I'm in the midst of a long winter of the spirit.  I hope your days are brighter!

With this brief post, I wish you holidays that are glorious and bright and may all your dreams come true.  Happy Holidays and Happy New Year.

Posted by The Grinning Sheep at 6:00 AM
Older Posts Home
Subscribe to: Posts (Atom)

Can You See Me? 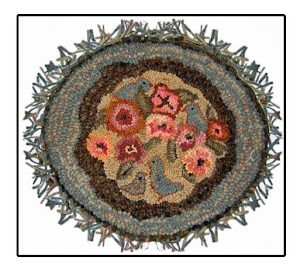 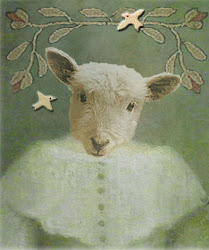 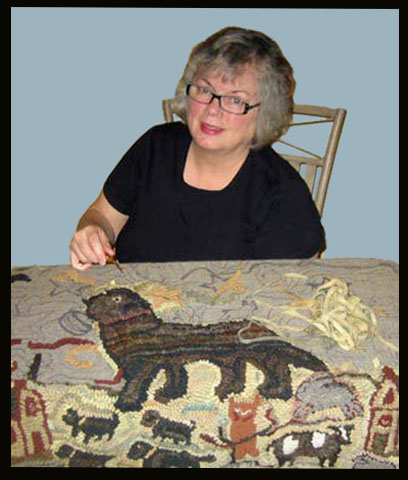